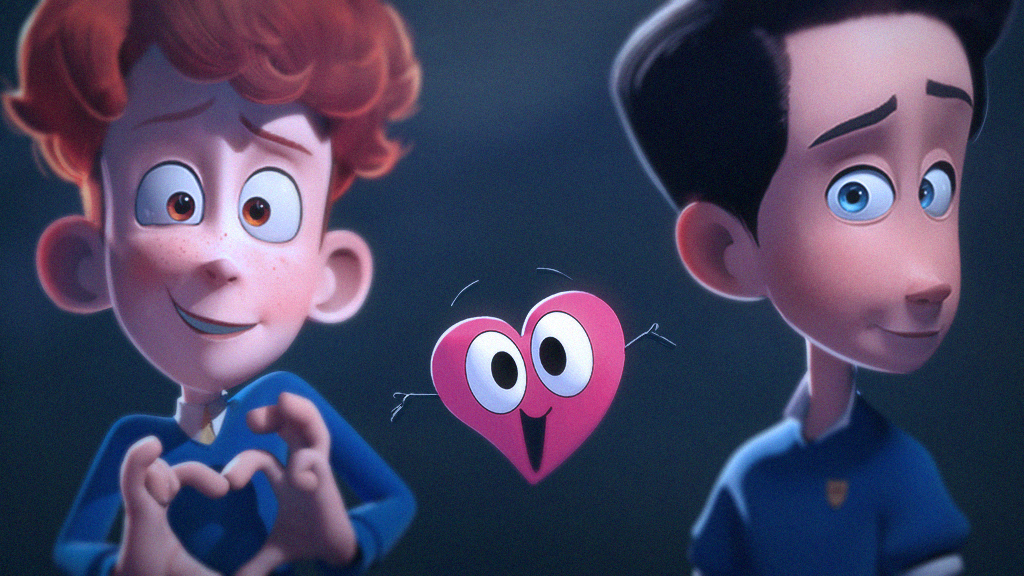 A young boy gets put in the spotlight as his heart literally jumps out of his chest and chases after his crush in the silent short-film “In a Heartbeat.”

The four-minute animated piece follows Sherwin, a shy school boy, who has a crush on another boy named Jonathan, and his heart’s desire to be with him.

The film begins at the gates of Sherwin’s school, as he frantically hides from Jonathan who is quickly approaching. Hiding in a tree, Sherwin admires Jonathan from afar but hits his head on the tree.

Full with the fear that Jonathan might see him, Sherwin quickly takes cover behind the tree trunk. At that moment, Sherwin’s heartbeat becomes erratic to the point where it jumps out of his chest and chases after Jonathan. In attempt to catch his heart, Sherwin ends up in awkward positions with Jonathan.

When Sherwin manages to catch his heart, he runs away before other students can see. Jonathan, unable to react to the event, continues walking towards the building doors. Sherwin’s heart becomes free of his grasp and follows Jonathan into the entrance. By the time Sherwin gets to the doors, he opens it to his heart cuddling Jonathan and tries to retrieve it. With everyone looking at the two on the ground, Sherwin quickly pulls at his heart and exits the school. During the act, he ends up breaking his heart with one half in his hand and the other in Jonathan’s.

Sherwin, sad and crying, finds refuge behind a tree, but is surprised when Jonathan approaches him. Hesitant to face Jonathan at first, Sherwin gives in and sees that Jonathan came to give him back the other half of his heart. The heart, back together, is once again happy as the two sit next to each other.

Since its release in late July, “In a Heartbeat’s” has gotten many awards and has been praised by other animators. News of the film’s release went viral on social media apps, such as Twitter and Instagram and has gained more than 28 million views on YouTube.

The short, animated by Beth David and Esteban Bravo, received positive reviews because of its progressive message about the Lesbian Gay Bisexual and Transgender (LGBT) community, emotional resonance and reliability to many teens today.