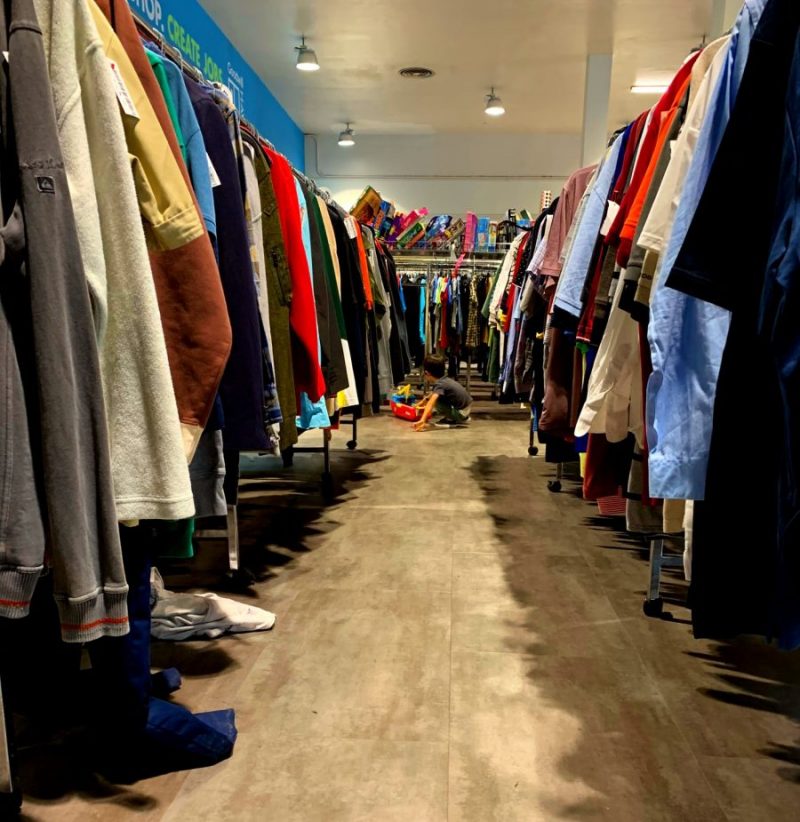 There is no doubt that fashion has become a way for youth to express their identity. We use clothes on the outside to reflect the thoughts, opinions and feelings that we have on the inside. And, in light of young Swedish activist Greta Thunberg’s efforts, more and more teens are becoming increasingly aware of their environmental footprint—juggling self-expression with personal beliefs and values, particularly in the world of fast fashion.

Fast fashion is inexpensive clothing produced rapidly by mass-market retailers in response to the latest trends. By this, the industry turns what used to be four fashion seasons into 50 to 100 micro-seasons. And in doing so, American consumers are producing 82 pounds of textile waste annually, adding up to 25 billion pounds of clothing waste per year. This comes from “The True Cost,” a documentary investigating how and who makes clothes for the world’s fashion.

One way to fight these fashion statistics would be shifting shopping habits to thrifting. 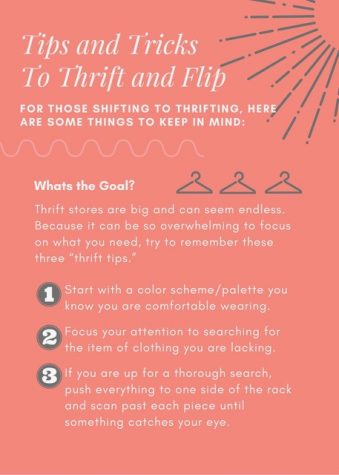 In 2017, 40 percent of 18-to-24-year-olds shopped resale, according to ThredUp. It’s for good reason, too. Thrifting is gentler on the environment by reducing pollution and waste, as it’s an easy means of recycling. Giving a preloved item new love not only rescues it from the landfill but also helps shrink one’s carbon footprint; since there are less natural resources used to create new fabric and clothing and to ship the item thousands of miles to a store.

“In addition to purchasing retail responsibly, thrift shopping is a great antidote to this problem. Donating to and buying from thrift stores extends the lifespan of our clothes,” according to PlanetAid.org, a non-profit organization focused on the collection of clothing and other household items for resale and recycling.

“Imagine the progress we could make if every person in the United States donated just one item or purchased one item from a thrift store each year, instead of throwing them out or shopping retail,” the website said.

“I like to buy clothes that I can easily flip so that they fit my body better, whether that be making them shorter…or smaller,” she said. “I can see potential in a garment and can make it more stylish.”

The challenge to style an old garment to look new is not only great for the environment and for one’s aesthetics but also for the wallet.

“As a student preparing for college, buying cheaper clothes allows me to be in fashion and not break the bank,” she said. “Why would I spend up to $50 on a shirt when I can get one for $3, and make it even better than the one in the store?”

Most thrift shops offer low prices compared to their retail counterparts. For example, secondhand clothing is usually no more than $10 a piece; shops frequently have items on clearance, too, or offer daily specials on specifically-colored tags. But regardless of the sale, secondhand clothing will always be the most affordable option.

Creative expression and affordability are several strengths to thrifting; however, the items that get donated do not always end up in other people’s closets. Flaws or pieces no longer in style might get rejected due to little to no resale value.

According to a 2018 Savers State of Reuse Report, only 28 percent of people donate used clothing, while 7 percent purchase used clothing. In doing the math, it’s true that pre-loved clothing can still end up in landfills.

Despite the surplus in secondhand clothing, more donations and recycling programs appear every year, particularly by retailers. H&M and American Eagle Outfitters launched clothing drives, with the incentive to replace old items with something new. Madewell, Inc. promises to turn unwanted jeans into housing insulation for those in need; plus, $20 off of a new pair for the sustainable shopper.

Becoming an advocate for this change is like anything else, tedious. It is difficult to reflect on our spending habits and acknowledge that, in many ways, it is probably doing more harm than good.

As fast fashion trends become more common, it’s clear that this issue is not one we can simply slap a green sticker on and call it, “environmentally sustainable;” rather, it is one that requires the source of the problem—the retail companies—to step in.

As one of the top three fashion retailers in the world, The H&M Group is already taking these steps toward brand transparency.

According to the New York Times, “This is part of the company’s new ‘consumer-facing transparency layer.’” H&M shoppers can now find out the country from where clothing was manufactured; they can also learn details on materials and recycling, the name of the supplier, the factory address and the number of workers employed there. This is the first effort of its kind made by a retailer on this scale.

The bottom line, it’s important to choose brands that are both sustainable and humane.

“If a store has unethical practices or values that I do not agree with, then I would not shop there,” thrifter Ishihara said.

“Even though a store could have morals and values that I disagree with, I still find myself gravitating towards shopping there because their products are trendy, cute and everyone uses them,” she said.

While some retail companies are becoming more transparent, others, like Levi’s, have been taking a different approach to fast fashion—by way of a recent movement called slow fashion.

This awareness considers the processes and resources required to make clothing, particularly focusing on sustainability. It involves buying better-quality garments that not only last longer but also values fair treatment of people, animals and the planet.

However, because these garments are made with higher-quality materials, they also tend to come with higher prices. For Canadian boutique brand Encircled, a blouse costs anywhere from $130 to $200, while a scarf can cost up to $100. The company believes “less is more when it comes to your closet and how and who made your clothing matters.”

“I think that their mission is admirable but using sustainability as a marketing ploy rather than an environmental purpose is still wrong in my opinion,” Ishihara said.

For sustainable efforts created by fashion brands to have a lasting and global effect, it must first become a viable option to demographics,  greater than just those who can afford it. Consumers who want to make change and have control over what their money supports have the right to do so but should still not be left to pay $100 for a single article of clothing.

Power to the shopper

In the end, whether shopping at secondhand stores or at eco-minded ones, change begins with the individual.

Shifting to a more conscious consumer mindset is a simple and effective way to create new mainstream fashion trends; one that is rooted in giving power back to the individual, not only by reducing their consumption of fast fashion products but also by allowing them to shop on their own terms and maintain their own rights and values.