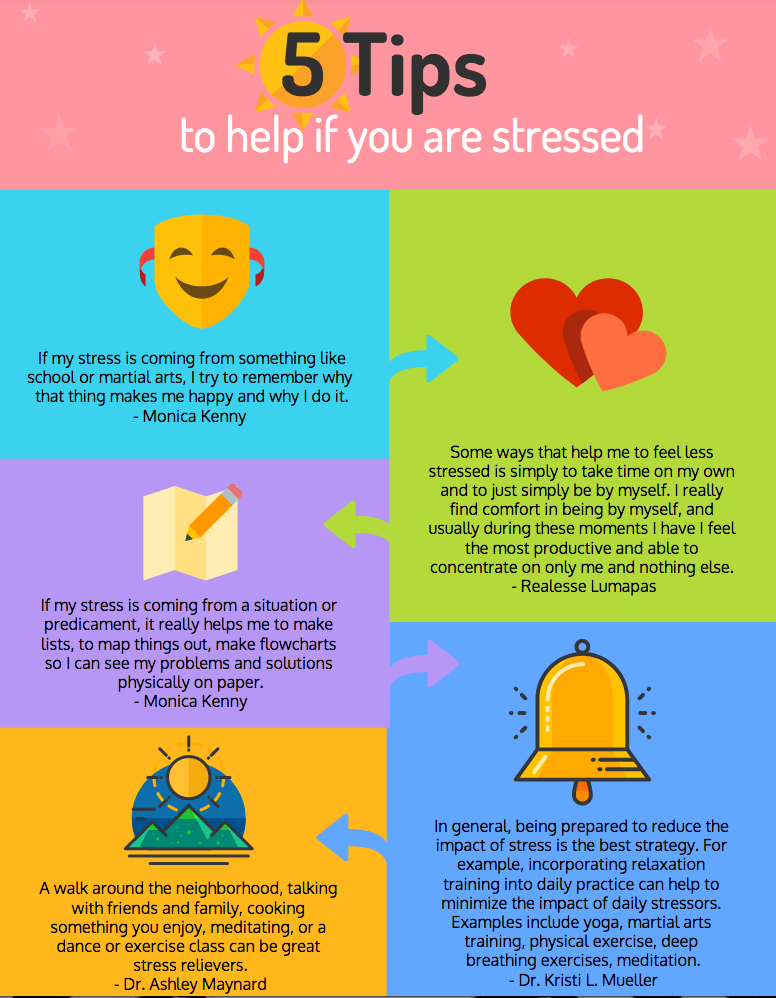 Do you feel stressed?

If you answered yes to this question, then you aren’t alone.

In 2015, New York University conducted a study using two private high schools in New York City. Forty-nine percent of the students reported having levels of stress. More surprising than that, females reported having more stress than men at their schools.

“I think stress is everyone’s body’s way of responding to a demanding situation, like a reaction that we all get to different things,” Sacred Hearts Academy junior Monica Kenny said.

Medical News Today defines stress as being, “The body’s natural defense against predators and danger.” Often this is interpreted as either a flight or fight reaction to a situation that is perceived as dangerous. In everyday use, stress isn’t related to danger, but, rather, it is connected to the feeling of being overwhelmed with tasks.

For now, this stress can be a motivator. The stress before a test or project can be a good source of stimulus to study or work. If the overwhelming feelings persist, however, it can negatively affect the immune system. Eventually, the prolonged period of stress can lead to increased levels of anxiety.

“Anxiety is considered a negative effect of stress,” said Ashley Maynard, a professor at the University of Hawaiʻi at Mānoa.  “Anxiety involves worrying about a future situation.  When you are apprehensive about what might happen, that’s anxiety. ”

Anxiety and stress are often confused for each other.

In many situations, these words are used interchangeably. This has, however, lead to a distorted idea of what stress and anxiety really mean. While they do exhibit very similar symptoms, anxiety is a serious mental disorder and stress is usually a result of a situation or circumstance. Stress has a clear cause, anxiety does not.

“To me, and probably everyone else, they’re very much synonymous,” Academy senior Realesse Lumapas said. “I think what differentiates themselves from the other is that I view anxiety as a constant feeling of ‘dread’ or worrying that’s really sickening to the stomach while stress, in a poorly descriptive way, is perhaps the feeling of being more so ‘overwhelmed.’”

There are several different types of anxiety disorders, including panic disorder, social anxiety disorder or generalized anxiety disorder. There is no one solution for any of these disorders, but the most common treatments are cognitive behavior therapy and medication. The major drawback for these treatments is the price. Low-cost therapy options include federally funded health centers, where patients can pay what they can based on their income, or colleges that offer minimally priced public sessions.

“In general, being prepared to reduce the impact of stress is the best strategy (rather than waiting for the stress to happen and then deal with it),” said Kristi L. Mueller, a licensed clinical psychologist for Pacific Sunrise Psychological Services. “For example, incorporating relaxation training into daily practice can help to minimize the impact of daily stressors. Examples include yoga, martial arts training, physical exercise, deep breathing exercises (and) meditation.”

Stress is a completely different issue entirely. Every person will have a different way of dealing and overcoming the stressful patches in life.

“Stress affects everyone differently. Factors that influence how stress affects an individual vary based largely on how they perceive their ability to cope with the stressor,” Mueller said. “Someone who views him/herself with good resources to cope with the stressor will have a smaller stress reaction than someone who views him/herself with limited coping resources.”