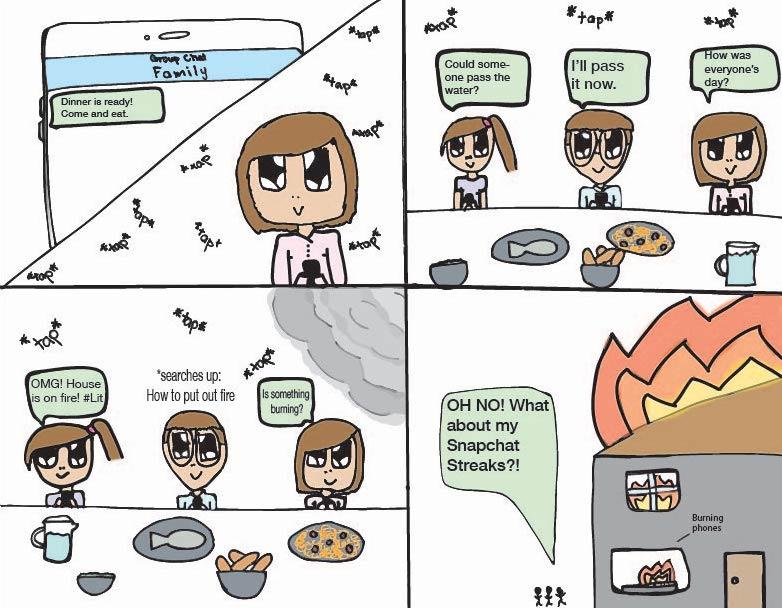 With society’s growing obsession with mobile technology, many find it difficult to put it down. Such devices, particularly mobile phones, are used everywhere from the car to the classroom, and for some, the dinner table.

It’s a growing trend taking over households throughout the world, going against the traditional belief that using phones—or not actively participating in conversations—during social gatherings is just plain rude.

“Dinner, for my family, is more of a tradition and silent bonding time,” Sacred Hearts Academy sophomore Sally Do said. “When we have our phones out, it completely deters us from that goal.”

Results from a recent survey echoes Do’s beliefs. The survey by Pew Research Center found that 88 percent of people believe cell phone use at the dinner table is not OK.

Pew, which surveyed more than 3,000 adults in 2015, also found that 82 percent of respondents say that using a phone in a social setting hurts conversations.

“What I have experienced from family dinners has become irreplaceable for me,” Do said.

Families, who use mobile phones during dinner, tend to be uncommunicative and isolated from each other, she said. Non-phone users interact and engage in conversations more easily.

Another study by Tech Timeout states that 61 percent of America thinks society uses electronics too much. Parents are supposed to be role models for children, the study says; therefore, when adults are seen multitasking, it could leave a negative impact on children.

“I prefer going on my phone (during dinner) sometimes, especially when there’s a conversation I want to avoid,” said Chun, who often texts and goes on social media while eating a meal with her family.

She said her family also uses their phones at the table but still manages to have verbal conversations with one another.

Sometimes people forget how powerful and distracting modern technology can actually be. Phones help others, who are far, seem close, but make the ones, who are close, seem far.