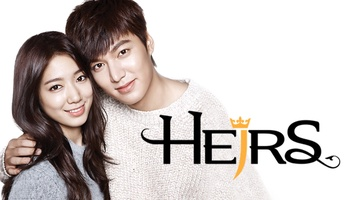 “Heirs” stars Kim Tan (Lee Min Ho) as an illegitimate child who is forced to live alone in California because his father has sent him there. In California, he meets Cha Eun Sang (Park Shin Hye) who is there to help her sister with her wedding. Eun Sang also wants to see if she can have a new life there.

After Cha Eun gives her sister money, her sister takes it and leaves her with nowhere to stay. When Tan sees this, he offers to let her stay at his house.

From these events, Tan begins to like Eun Sang although he has a fiancee, Yoo Rachel (Kim Ji Won), whom he doesn’t like. The engagement has been arranged by their parents.

When Rachel shows up, she is angry with Eun Sang and tells her that she is Tan’s fiancee. Eun Sang is surprised by this information and decides to try even harder to find a way back to Korea.

When Eun Sang finds out that a friend is in America, she asks him to help her. At the same time, Tan is also returning to Korea because his father has allowed him to return.

When Tan gets to Korea, he finds out that Eun Sang is working as his family’s maid. He is excited that he has found her again.

After some convincing, Eun Sang agrees to go out with Tan.

When Tan’s father finds out, he is furious and demands that they break up.

Will Eun Sang and Tan be able to be together or will they be forced to separate?

“Heirs” is recommended for teens because of some of the fight scenes that happen throughout the drama and the romance between the characters.