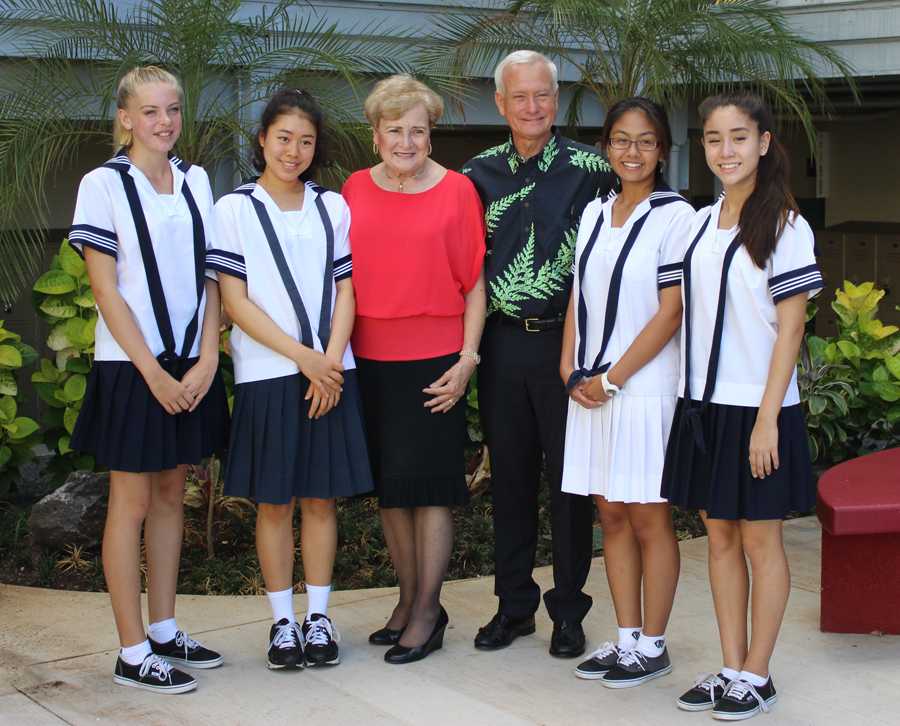 Honolulu Mayor Kirk Caldwell spoke to students about current issues in Honolulu and their participation in government.

Caldwell gave American Government and English students a brief history of democracy, beginning in Athens, Greece, and ending with the Founding Fathers. A strong supporter of the democratic system, Caldwell stressed the importance of the equilibrium of government to prevent corruption through absolute power.

Caldwell said that students can gain experience in dealing with a variety people just by living in Hawaii and experiencing the diversity of ethnicities.

“It’s a small community. We don’t get that anywhere else in America, and Honolulu, while it’s a city of a million people, we all know each other so we’re very engaged,” said Caldwell.

Five goals of Caldwell as mayor were to repave roads, create rail transit, rebuild the sewer system on time, restore bus routes and move homeless out of parks. Caldwell discussed what the State of Hawaii is doing about these issues and the progress that has been made.

Caldwell told students who are the future of democracy to be active in government and make a lasting impact in school and in the community.

Caldwell is grateful to hold his position in government.

“I am so lucky to be mayor of the City and County of Honolulu. I think it’s the best public service job in the country. As a mayor, you make a difference every day,” said Caldwell.

Senior Jadeanne Domanguera said, “Mayor Caldwell gave us a positive insight of how the government serves the community and encouraged us to become engaged in our community.”

Freshman Christianne Moss said, “I walked away from the mayor’s speech inspired.  He made me feel like I can accomplish anything that I want to accomplish.  His speech made me feel hopeful and he proved to me that I am capable of anything and everything.”

Senior Alyssa Kwan said, “He inspired me to never give up and that by being involved, I could make a difference.”

Freshman Sara Cheng said, “I learned that the greatest gift is education. We should take advantage of what we have right now and absorb everything into our brains. With education, we can strive for the best and make our dreams into a reality.”

Some students were not of the same mindset as the mayor.

Senior Jamie Toler said, “While I did not agree with everything Mayor Caldwell said, he was personable and I enjoyed his presentation on the importance of government.”