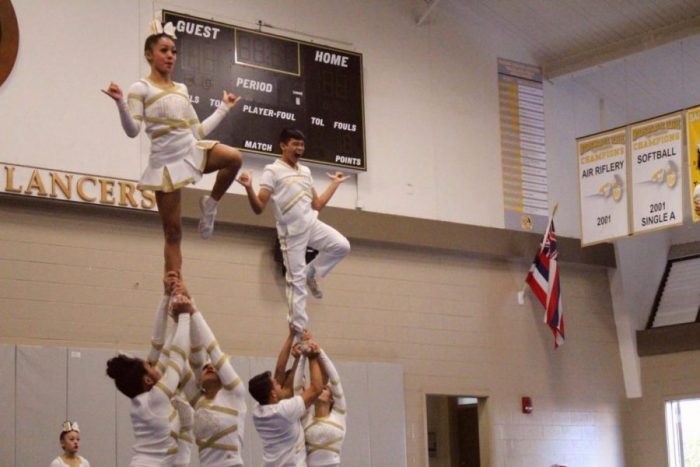 “(People think) cheerleading is for girls,” Kane said. “But I didn’t care about the stereotypes…I was like, I kind of want to be like that…and thought it was really cool.”

For the past two years, and without any prior cheer experience, Kane encouraged classmates from his all-boys school to join. The Crusaders had been cheering alongside all-girls school Sacred Hearts Academy for years, as stunt support, but to compete at a local level, the boys needed to form their own team.

“The boys didn’t feel right about leaving the Sacred Hearts program for another team, so they formed their own,” Head Coach Kainoa Rudolfo said. “The hardest part was getting enough athletes, so we harped on the boys to bring their friends out. People have a preconceived notion of cheerleading and that was hard to overcome.”

After forming a team of six, the Cru Crew, short for Crusader Crew, began making a name for itself; paving the way for other schools to try something out of the norm, Kane said. The varsity team placed fifth at this year’s ILH cheerleading championships, competing against female cheer squads.

“Being a male changes nothing, as it is just a sport to show who tried their best, who worked their hardest and who comes out on top,” Kane said.

Rudolfo thinks the boys team should have finished higher in the ILH championships but understands how judging might have been difficult.

“It’s hard seeing something different than what you are usually used to,” he said. “But those boys brought the house down every time they performed.”

Cheering with and against ‘sisters’

Having their own team meant the boys would be competing against their “sisters,” as they call the Academy team members.

“Cheering against them in competition was interesting because they are our teammates and our biggest competition at the same time,” Academy senior Kayla Oka said.

Nationally, the Academy and Saint Louis are allowed to compete together as one team. Last month, they claimed their second national title at the JAMZ National Championship in Las Vegas. They scored 97.6 out of 100 points.

“It is so much fun to cheer with the Saint Louis boys because they always hype up the team,” Oka said. “The boys prove that our motto ‘Hard work beats talent’ is true because they came with no cheer experience and have since gained elite skills.”

Their winning routine was broadcasted live on KHON News during a pep rally on the Academy’s campus last week.

“I see the boys practice on campus all the time, so I know their dedication,” Academy senior Isabella Johnson said. “And I think seeing boys cheer in a traditionally female sport is inspiring and encourages those to pursue sports that they would not normally try.”

The Saint Louis team’s routines are a mix of martial arts, dance and gymnastics, including high-intensity tumbling and stunting skills. These characteristics are “more masculine,” Rudolfo said, in helping combat the stereotype of cheer being for girls.

Rudolfo has been coaching cheer for more than a decade, at several other schools and at a competitive cheer club. He also cheered for the University of Hawaii (UH).

“I had not experienced any stereotypes (when I was cheering for UH) because I entered cheerleading at the highest level possible,” he said. “I can only imagine what I would have experienced if I was in high school because kids can be mean.”

Saint Louis is a school known for its football program, winning its fourth state title last November; however, Kane said, cheerleaders are equally as important to the school’s athletics program.

“Being a cheerleader for Saint Louis comes with its own sense of pride, just as it is with being on the team or even just a student at Saint Louis,” he said. “But the cheerleaders are the ones who are on the field with the players, so being (able to) support the best team in the state puts a higher value on our pride.”

With half of the team graduating this year, the boys are not only hoping to recruit more members but also to encourage other schools to follow suit.

“I hope Saint Louis motivates and shows other males that cheerleading is a viable sport that can open doors for them and get scholarships,” Rudolfo said.