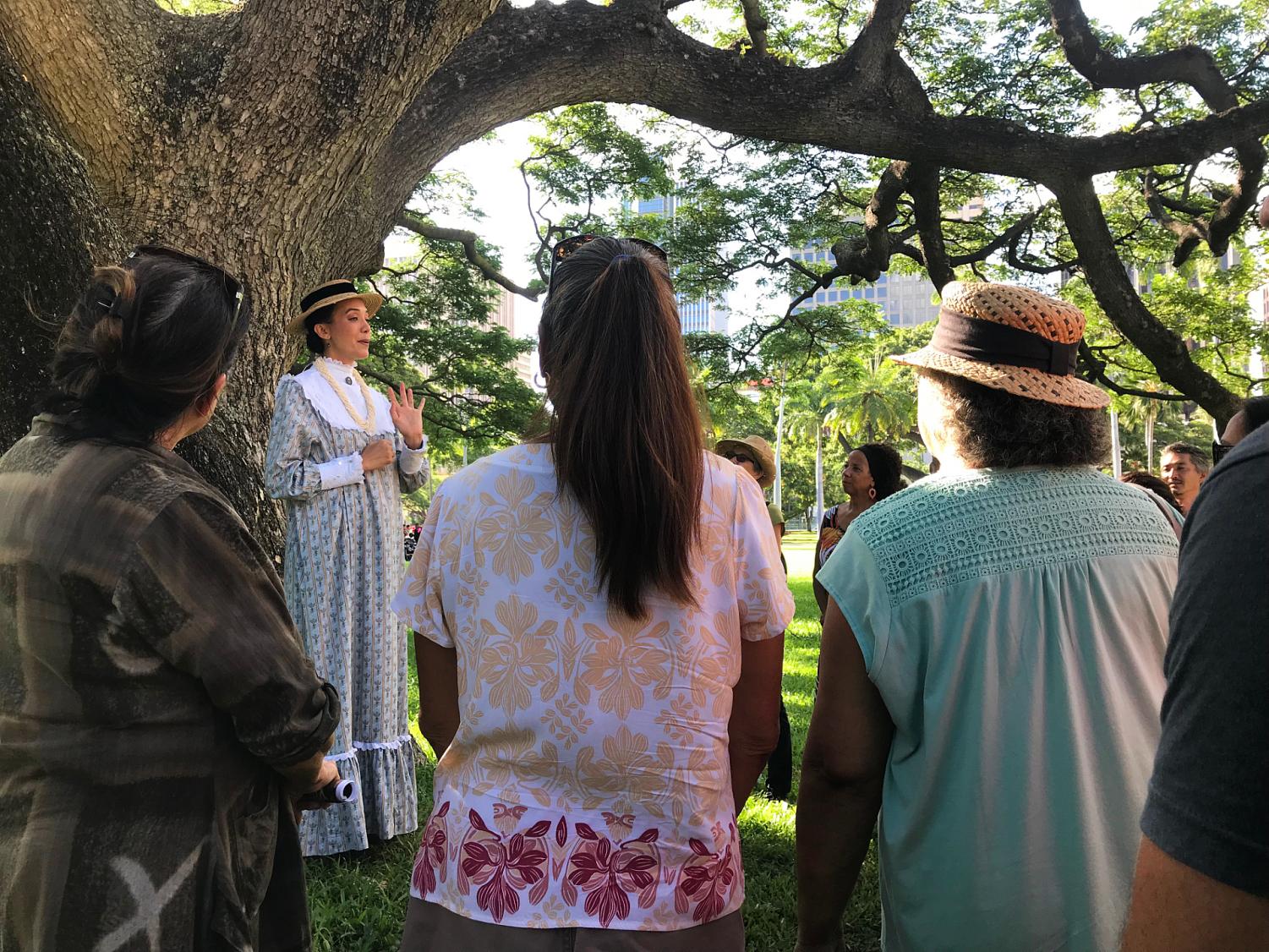 The drive towards the Hawaii State Capitol had been an uneasy one.

“Wouldn’t it be strange for Japanese people to show up to a Hawaiian event?” my mother questioned.

“If anyone asks, it’s for an extra credit assignment,” I said with ease.

Content with my answer, she parked on the side of the Hawaii State Public Library in Honolulu, admiring the bronze bracelet and lei adorning late politician, and third generation Japanese-American, Patsy Mink’s statue.

Mink’s statue, similar to the many others found across the island, looked to be very important with its engraved plaque; besides tourists, I wondered who really took the time to read them.

We were a few minutes early to Mai Poina, a free walk-through tour of Iolani Palace and reenactment of Hawaii’s overthrow.

I was under the impression that Mai Poina was going to be a quick extra credit opportunity of touring the palace grounds. But as it turns out, it was a chance for me to step back in time and witness Hawaii’s history unfold.

At 4:10 p.m. sharp, a small group gathers outside of Iolani Palace. My mother and I make our way toward the group and are pleased to see people of all different ethnicities.

While I was not able to catch the name of the guide, I was able to catch bits of her experience on Mauna Kea. She describes in great detail what it was like to advocate with fellow Hawaiians against the construction of the Thirty Meter Telescope (TMT). And although she wishes to be “back up there” once more, she felt that Mai Poina was her “kuleana,” or her duty in Hawaiian, to educate those willing to learn about Hawaii’s history.

The ongoing plight of the Hawaiian people losing their sacred lands due to the planned construction of the 30-meter telescope had been an especially hot topic at the time.

Following the rest of the tour group, brilliant shades of yellow and red catch my eyes; they are shirts worn to represent the protest of TMT and a sign of solidarity, with the bolded yellow print of “Ku Kia’i Mauna” and the emblazoned image of Mauna Kea.

Although my first name, Noe, is derived from the Hawaiian language, I don’t have a drop of Hawaiian blood in me. I am a fourth generation Japanese-American; the urgency that Hawaiians feel towards the threat of the TMT is something that I am unable to relate to because of my lack of understanding, but I am willing to learn. And through opportunities like the historical tour, I was able to educate myself on the past, present and future of Hawaii.

I found out about Mai Poina from my teacher. Through these opportunities, I see more and more how Japan’s influence stretches far beyond Hawaii’s tourism industry.

Small details I never noticed before, until this tour, include signage found on trolley cars. Both the English language, as well as Japanese translations, are side-by-side. They also decorate the many shops signs in Waikiki.

Additionally, Hawaii’s language accessibility allows for Japanese high school students to explore, in a non-intimidating way, through field trips designed to strengthen speech and explore the culture; field trips that are similar to the Mai Poina historical tour.

Next, we are herded onto the palace grounds. A woman dressed in a vintage Hawaiian muumuu sets the tone for the rest of the reenactment, describing what it was like to be living during the overthrow.

Suddenly, a man from the outskirts of the group interjects with anger. Mr. Ah Sing (played by Allan Y. Okubo) describes his frustrations as a Chinese immigrant, who is unable to vote due to foreign policies. The skit concludes with an actor breaking into tears at the disparity of the Hawaiian people.

My train of thought is broken by the sound of church bells chiming from nearby Kawaiahao Church. Throughout the reenactment, I could not help but notice the passion behind each of the actors. The setting on the actual palace grounds made immersion into the story easy to visualize, while the actors pointing out modern locations and connecting them to historical events made the play more relatable.

My mother and I particularly enjoyed the inclusion of a Japanese plantation worker character. Prior to attending the reenactment, we both had not really looked into the early presence of Japanese settlers in Hawaii. The only event that came to mind was the attack on Pearl Harbor.

The Japanese plantation worker presents himself as an honest, hardworking laborer who just paid for his share of land. The worker also has a strong allegiance to Queen Liliuokalani, ready to fight at a moment’s notice.

The inclusion of Chinese, Japanese and European immigrants throughout the reenactment reflects Hawaii’s melting pot of cultures. It also provides a better understanding for both my mother and me.

At about 4:50 p.m., the group makes its way towards the side of the palace. It was an area I had never seen, nor ventured near before; what caught my eye was a shiny bronze statue of Queen Liliuokalani.

It was then that I realized just how meaningful this statue was. Tucked away in the shadows of the state building stood a queen in all of her glory. To me, the placement of the statue symbolized the queen, immortalized and a protectorate of not only the palace grounds but of Hawaii’s history as well.

Prior to attending the Mai Poina tour, I took a Hawaiian history class over the summer before my sophomore year. Although the class did spark some interest in me, it didn’t have the lasting impression that the overthrow’s reenactment did.

And although my mother enrolled me in hula classes when I was younger, I had no real knowledge of Hawaiian culture. I never thought I would find myself spending a Sunday afternoon learning about Hawaiian history, but I’m so glad I did. It was an enriching and enjoyable experience that I hope others will support and further upon in the future.