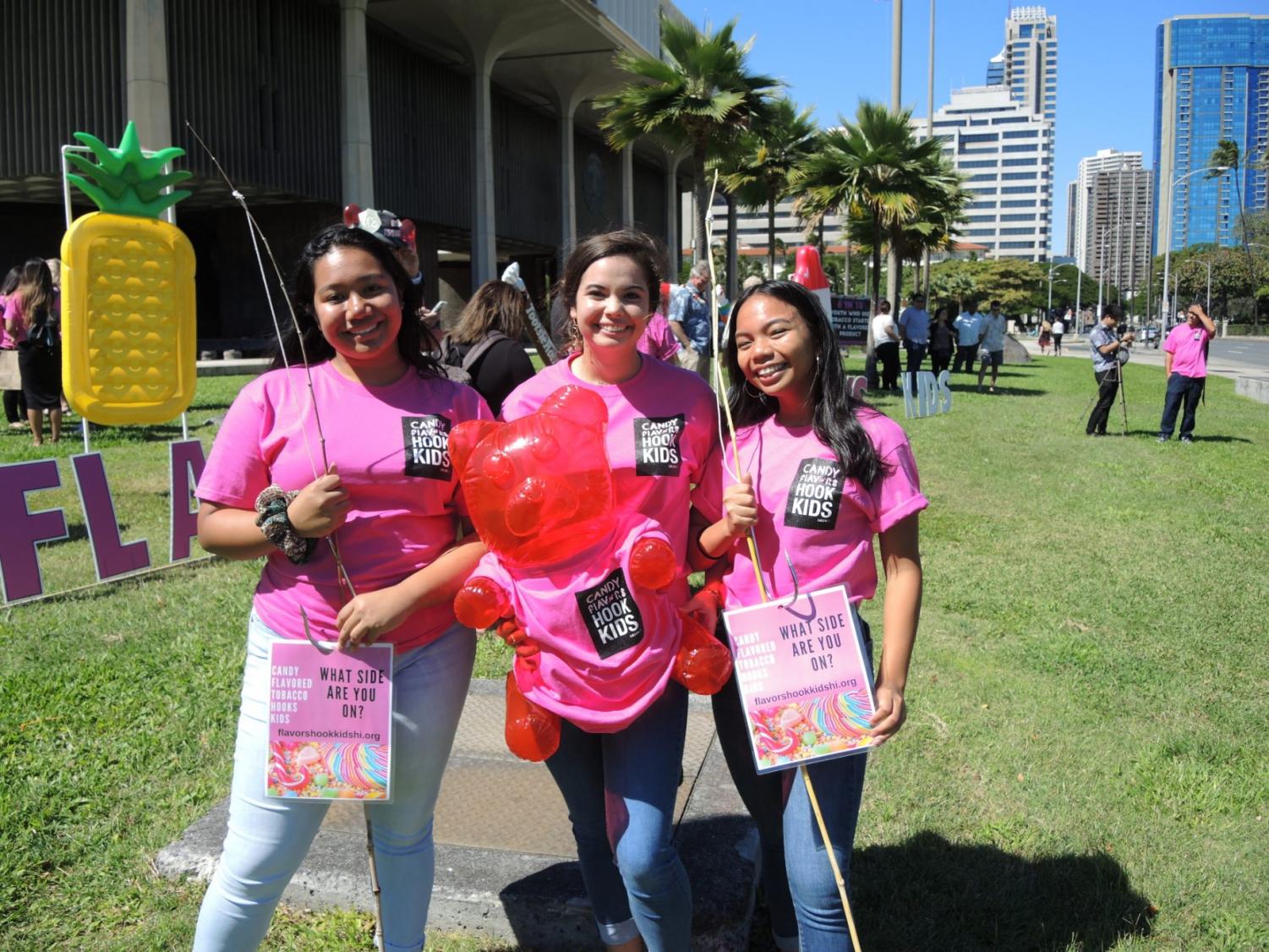 “Candy flavors mask the taste of tobacco, which I’ve been seeing become more popular among my peers,” Academy senior Agnes Brown said. As a youth council member for the Coalition for a Tobacco-Free Hawaii (CTFH), Brown joined state lawmakers, health organizations and other students in the anti-flavor-tobacco initiative earlier this month.

The public display brought attention to two bills that would make Hawaii the first state to pass a ban on flavored tobacco products, which advocates say the tobacco industry has used as a way to target youth.

HB276 and SB1009 would eliminate the sale of products statewide, including electronic smoking products.

Both bills are currently being reviewed and, if passed, would take effect January 2020.

National studies show more than 80 percent of youth who use tobacco start with a flavored product, while 95 percent of smokers start before the age of 21. In Hawaii, 1 in 4 high school students regularly use electronic cigarettes, or e-cigarettes, according to the state Department of Health.

“The purpose (of the bills) is to reduce the number of people, in particular youth, that use tobacco products,” CTFH Youth Coordinator Scott Stensrud said.

Juuls, a type of e-cigarette that looks similar to a computer flash drive, have become increasingly popular with middle and high school students. Its sleek design and appealing flavors mask the high concentrations of nicotine, which can be damaging to brain development.

A 2017 study by Truth Initiative reports that one-fifth of youth ages 12-17 has seen Juuls in school.

‘Up against the industry’

“We’re up against the industry, (and) to counter the money the industry is pouring into defeating this bill, we need to gather even more supporters,” Stensrud said.

In 2016, the tobacco industry spent about $9.5 billion on advertising and marketing, according to the Center for Disease Control and Prevention (CDC).

Although a person must be at least 21 years old to buy tobacco products, Stensrud said teens obtain products through friends or older family members. They also find them online.

“Some know of stores they can get (these products),” he said. “Either it is because they know somebody who works in the store, or they just know that the store would sell it to underaged individuals.”

‘Not appropriate or intended for youth’

Local businesses, such as VOLCANO eCigs, disagree and point to their policy on checking identification.

“We’re very strict and ID everybody,” employee Manuel said. “No matter if they look like their 80; we 100 percent ID check, and we try to do that before someone asks a question about a product.”

Despite the policy, the company still encounters many underaged customers.

“Customers have their uncle, or someone, try to buy for them,” he said. “It happens quite often. If we see the older person asking questions for the younger person, then we kill the whole sale.”

The company has several shops throughout Oahu but also sells products online.

The same policy is in place for companies like, Juul. Users must agree to being of legal smoking age by clicking a link to enter. The top of the homepage reads in bold letters, “WARNING: This product contains nicotine. Nicotine is an addictive chemical.”

According to its website, Juul is an alternative to smokers, with a mission to “improve the lives of the world’s more than one billion adult smokers by eliminating cigarettes.” It continues by stating that the company does “not want to see a new generation of smokers” and that it “wants to be part of the solution to end combustible smoking, not part of a problem to attract youth.”

“The tobacco industry argues that…some adults use (e-cigarettes) to quit, but it’s really switching from combustible cigarettes to vaping, so it’s really not quitting,” CTFH’s Stensrud said. “They still have an addiction to nicotine; they’re just using a different product for it,”

To combat these statistics, the youth council–consisting of high school and college students–continues to advocate during legislation.

In 2016, the council helped raise the age of tobacco sales to 21 years old. This was a first for any state. It also helped pass a law prohibiting smoking in cars with kids throughout Oahu.

The council advocates against tobacco use through community presentations and policy change at the local and state levels.

“Being part of this youth council is my way of lessening the effect of this epidemic,” Academy senior Brown said.

The most impactful way to get their message across, members say, is through peer-to-peer outreach. Youth advocates recently presented to more than 20 schools and organizations, including the Hawaii High School Athletic Association.

This week, Brown presented to Academy students and families about teen tobacco use, specifically vaping through the use of e-cigarettes.

In addition to peer-to-peer outreach, youth council members have produced videos used as part of the 808 No Vape Campaign, as well as participated in the Breathe Aloha Mural Tour. The murals can be seen throughout Hawaii high schools. They are meant to encourage tobacco-and-vape-free lifestyles.

Next month, Brown and other youth council members will participate in the national Kick Butts Day. The initiative raises awareness about the dangers of using tobacco. More than 1,000 events in schools and communities around the world are expected to participate.