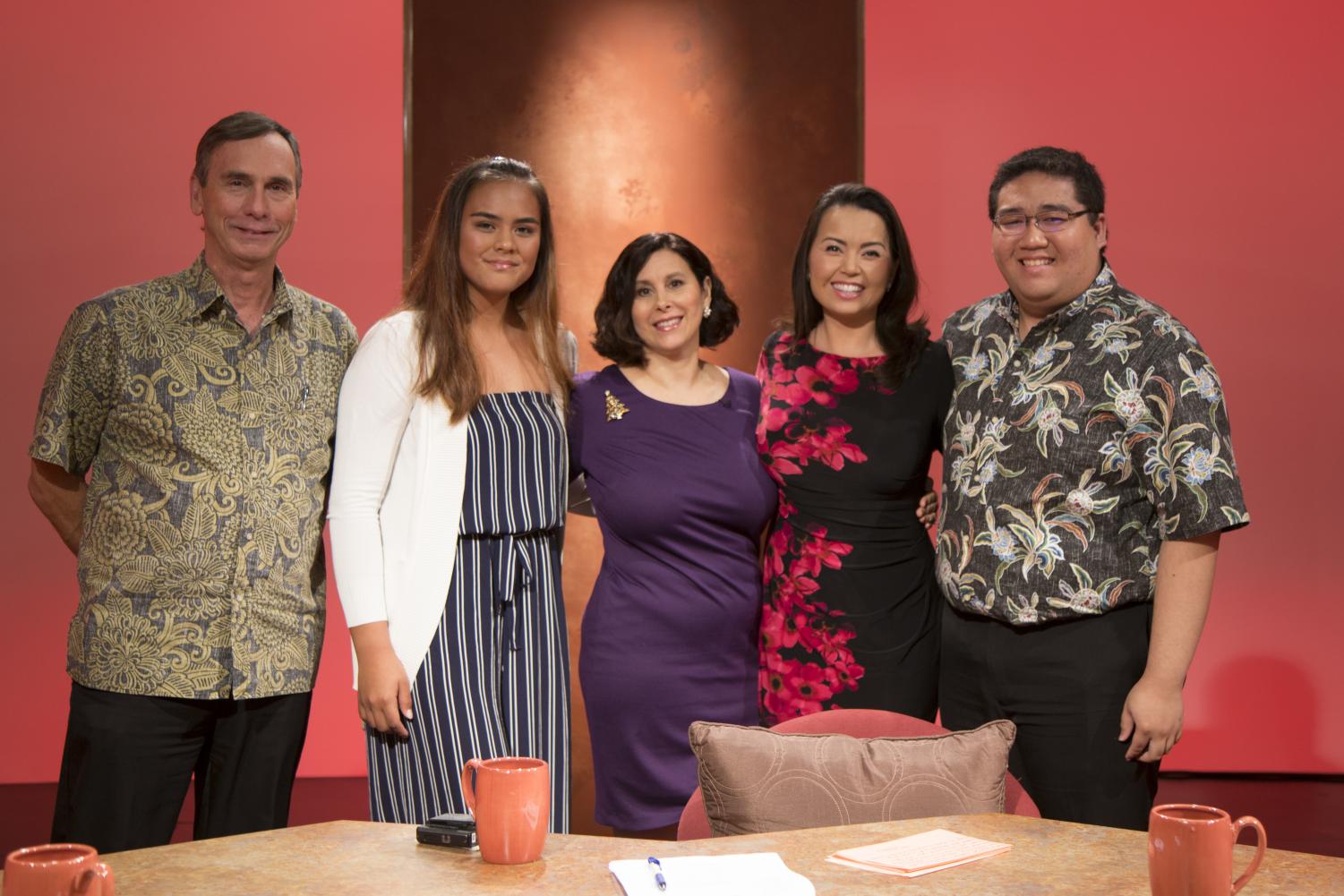 Beads of sweat collected on my forehead, as I stared at a thermostat reading 64 degrees. I could feel chills run through my body and a warmth slowly consume my face, as I awaited one of the most momentous occasions of my high school journalism career–participating in a live televised discussion alongside some of Hawaii’s most notable movers and shakers in media.

I was selected to represent a high school journalist’s perspective on some of the top news stories of 2017. Moderator Beth Ann Kozlovich, journalists Yunji De Nies and Daryl Huff and Spencer Oshita, the editor-in-chief of the University of Hawaii at Manoa’s student newspaper, were also part of the panel discussion.

The hour-long “Insights” program, which broadcasted on PBS Hawaii, was an opportunity to share what we believed to be the most important current events of the year. We also addressed how these stories might impact the future of our state, as well as present and future generations.

A week before the show, each panelist was asked to submit one story idea for six possible categories including, go figure, sea change, inspirational, truth to power, comeback and stories to watch out for in 2018. In preparation for the show, I spent many days reading news articles and researching topics submitted by each panelist.

The night of the show was definitely an unforgettable one. The set was just as I expected, producers scattered throughout the room, cameras bigger than the doorway and seasoned journalists discussing topics that were going to be brought up during the show. It was almost as if they were speaking another language, as they used words beyond my vocabulary and analyzed stories in such great depth.

After meeting the panelists, I was immediately introduced to the makeup artist. She vigorously dabbed away at my face and colored every crease of my eyelids in what I assumed was an attempt to give me the appearance of a professional, since my own effort to do so at home seemed to have failed. Having a professional makeup artist made me feel like a celebrity, but at the same time, the reality of being on television was also slowly sinking in.

After my makeup was finished, the director of the program gave me a tour of the studio and control room. Seeing places I’ve only ever seen on television was surreal, but it almost felt minuscule in comparison to seeing the discussion table I would be seated at in an hour’s time.

Caught up in all the excitement of meeting fellow panelists and exploring the studio, I realized things were about to get real when the set manager let us know it was almost show time. I took three deep breaths, as I was seated at the table and prepped for filming. The first thing that caught my attention was the colossal black camera pointed straight at me, daring me to look back at it.

The terror didn’t end there. I thought about how thousands of viewers would be watching, including my family, my friends and my teachers. I felt like everyone was expecting something out of me that was up to par with the professional panelists. As the thought crossed my mind, tears began to well up. I began having second thoughts despite hours of preparation, reading articles and analyzing the news.

Fortunately, being surrounded by everyone’s smiles and warm gestures helped to ease my nerves. At the last minute, I convinced myself that I needed to represent my school and generation with pride. To be able to voice my opinion and further inform people of what’s happening around them is what being a journalist is about. I was so lucky to have this opportunity to do so.

The countdown to going live began, and with each second that passed, the more determined I became to make my voice heard. That determination grew over the course of the show, as I tried to contribute to almost every conversation, using real-life experiences to make connections with the topics we were discussing.

The hour-long show turned into what felt like 10 minutes, but I was still able to learn so much more about the stories that helped shape Hawaii. Although there were times when I didn’t quite know how to answer a question, I managed to get through it and articulate a response to which the other panelists could add.

At the end of the show, the moderator and other panelists congratulated me on finishing my first live televised discussion, and the producer was there to give me a big hug. Because I was more familiar with everyone then when I first came to the studio, we struck up conversations that could have lasted for hours if I didn’t have school the next day.

This experience made me realize that there is so much more to journalism than working in front of a computer screen with my hands glued to the keyboard. It’s about getting out in the field and vocalizing the words I put on paper. I also realized that being a journalist means stepping out of one’s comfort zone in order to make your presence known.

Participating in the discussion reassured me that I have what it takes to succeed as a journalist and that if I keep working hard, it will only help me to become better. Maybe one day I’ll come back to the show as that seasoned journalist, speaking a “foreign language” about all that has happened and will happen around me.