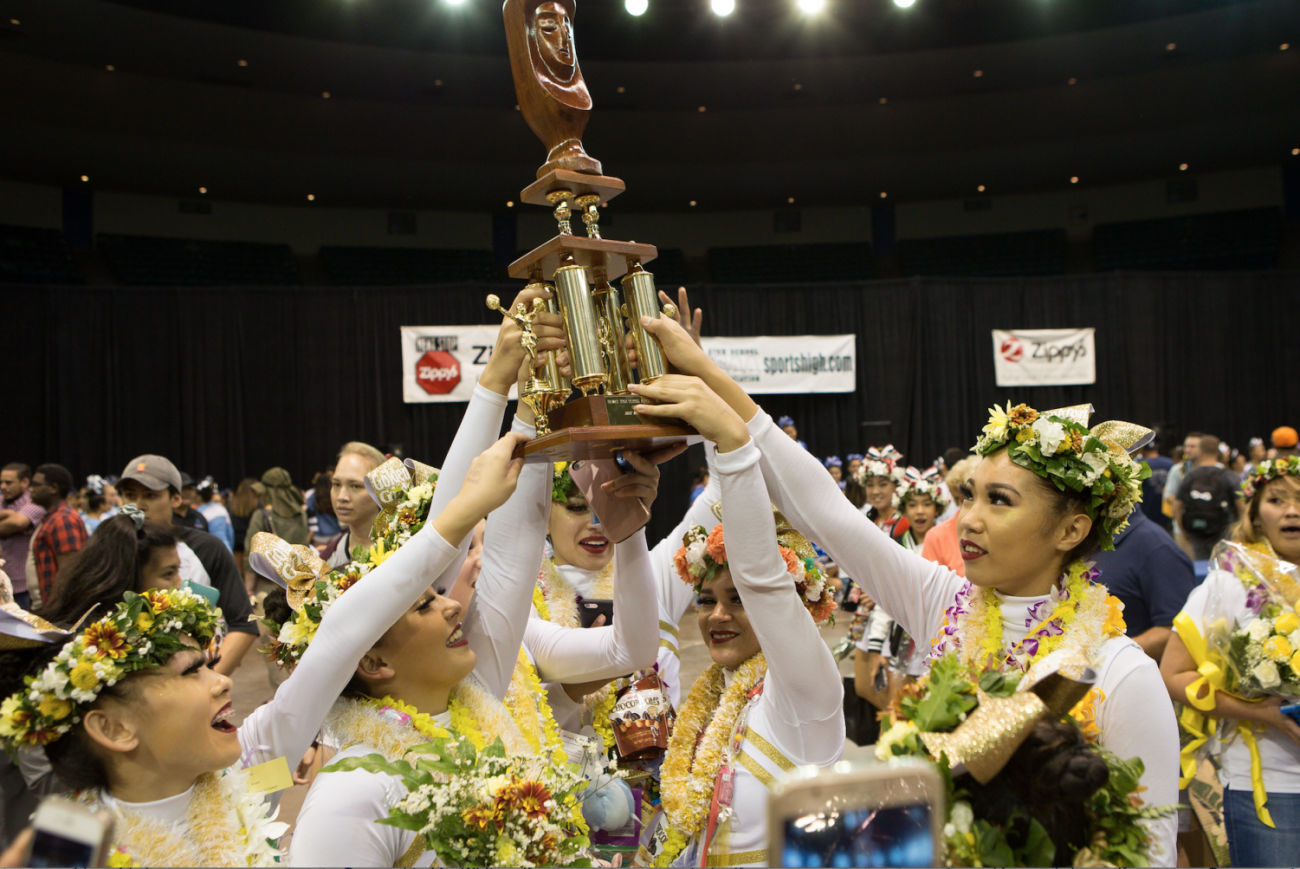 With a team motto of “hard work beats talent,” Sacred Hearts Academy’s varsity cheer team was crowned state cheerleading champions in this month for the Hawaii High School Athletics Association (HHSAA). The squad placed first in the medium division, with a score of 503.50 points–the highest score for both the medium and large divisions.

The ‘underdogs’ take the win

For the team, the recent victory was a dream they once thought out of reach. After years of consistently placing nearly last in competitions, the team took on a new mindset.

“‘Hard work beats talent’ is our motto because unlike other schools, which established themselves at the top for many years, we (have been considered) the underdogs,” said Head Coach Cadey Vakauta, an Academy alumna and former Saint Louis Cheer Club member.

The varsity team, determined to dispel that reputation, earned a spot in the state competition in October. This followed an undefeated streak for all three Interscholastic League of Honolulu (ILH) cheerleading competitions.

“The girls had to train 10 times harder to be at the level of their competition,” Vakauta said. “None of the members came to our program ‘made’ (but rather), they are all homegrown from the Academy.”

Junior Melina O’Reilly has been a Lancer cheerleader for four years and says it is a sport she has grown to love, despite the pressure of competing.

“At competitions, I’m scared (but it’s) not because I am not sure of my routine, but rather because I want to show the world…all the hard work we have put into the season,” she said.

Proud to be a Lancer, the team nicknamed themselves, “The Golden Girls” after the school’s colors, white and gold, as well as for their attitude of always “going for the gold.”

Their coach also credits the team’s win to their hard work, dedication and passion for the sport.

“When they performed, you could see their heart pouring out in everything they did,” she said. “That’s something a coach cannot teach or choreograph.”

The winning routine at the state competition consisted of a choreographed number to songs like, “Get Right” by Jennifer Lopez, “Wannabe” by the Spice Girls, “Miracle” by Mariah Carey and “Yeah” by Usher.

“We practiced every day, seven days a week for (about) three hours, but before that…it was around five to six days a week,” O’Reilly said. Practices included going through the routine multiple times, basic drills, CrossFit workouts and extra stretching. This was in addition to learning the skills and choreography required for competition.

A year prior to the momentous victory, the team, then at the junior varsity (JV) level, made Academy history after placing first in an ILH cheer competition. This was the first time any cheer team from the Academy–on any level–earned this spot.

Most of the JV team members from last year have since advanced to the varsity level.

Keeping a close bond through it all

Their coach said commitment and rigorous practices were not the only factors that played a role in the team’s success.

“Sisterhood was the most important,” Vakauta said. “(The) team created the most special bond, and because of that, they never let each other fall. During practice and outside of practice, the girls were constantly rooting for each other.”

“My team has an extremely tight bond, and I can genuinely say that they are my family,” O’Reilly said. “It is very important to have a good bond because, in a stunt, it is not just one person, but rather, it’s multiple people that have to be synchronized enough to hold (up) a person.”

The journey to the team’s win was one filled with many emotions and was not as easy as some may think, according to parent Lisa Oka. She explains that there were some days when her daughter, sophomore Kayla Oka, would need extra support throughout practices.

“There were times after practices when Kayla would get in the car, and I could tell she was struggling,” Lisa Oka said. “After one practice, (she) was literally sobbing. She was having a mental block on a tumbling skill, (and) she just couldn’t throw it.”

During this situation, Lisa Oka explained how sisterhood also helped her daughter through these difficult moments.

“All of a sudden, the tears dried up, and she looked at me…and said, ‘Mom, my teammates are the ones that encourage me every day,’” Lisa Oka said. “At that time, I knew this group of young ladies was special.”

Through all of this, and with encouragement from their coach and parents, the Lancer team learned to be humble in their actions–whether they win or not.

“We never expect to win,” O’Reilly said. “We just try our best and make sure that we have won in our hearts.”