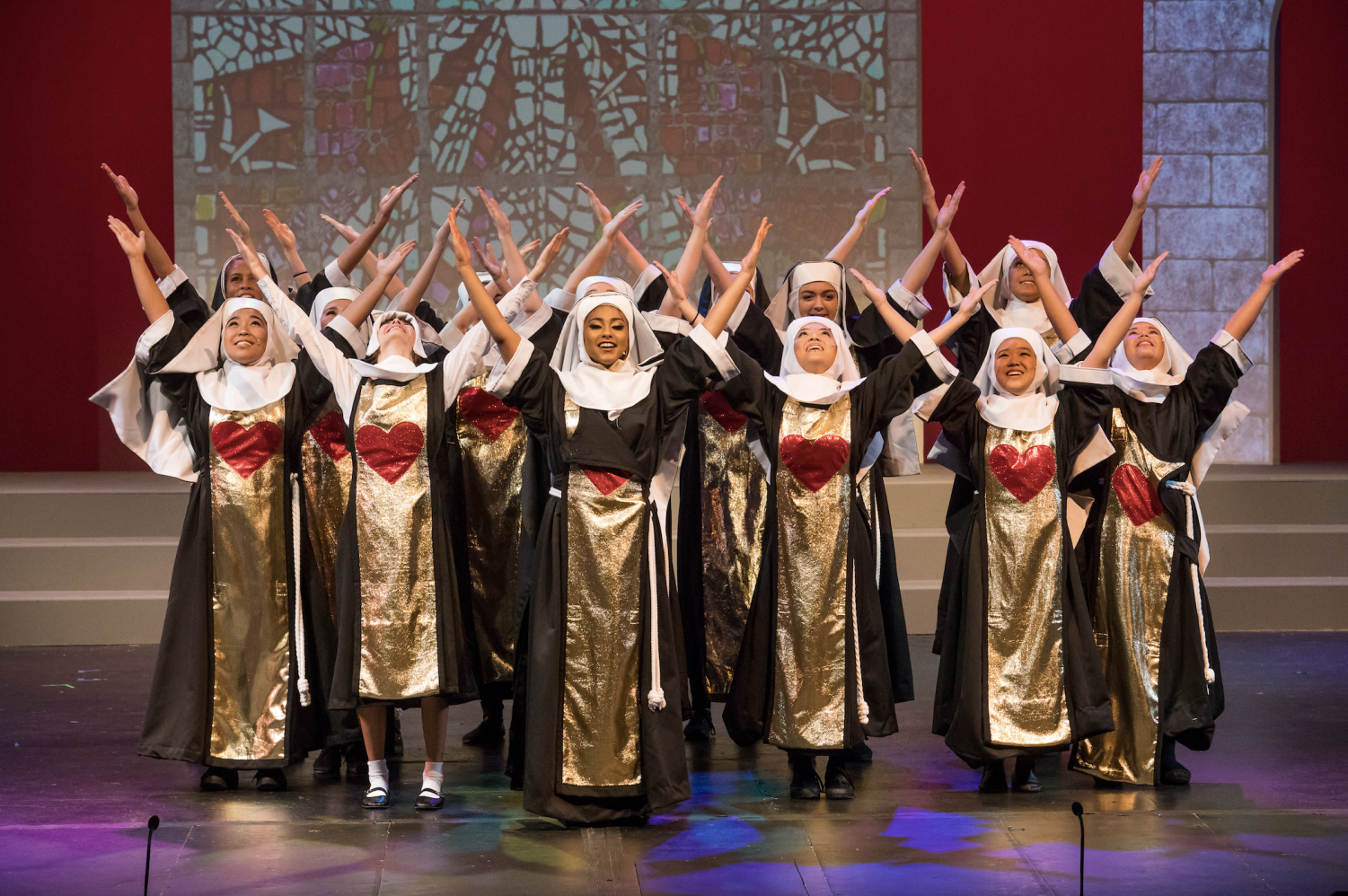 Are you ready for a night full of upbeat music and religious humor?

“‘Sister Act’ is an upbeat comedy,” Academy senior Alana Glaser said. “It will be especially funny for Sacred Hearts Academy students because they will understand the jokes and plays on words relating to the Catholic faith. The musical numbers are catchy, too. ‘Sister Act’ is really a blast.”

In this take of the 1992 movie of the same name, a glamorous bar singer, Deloris Van Cartier, played by senior Mahealani Sims-Tulba, stumbles upon a crime scene. Forced into witness protection for her own safety, she hides in a failing convent with a group of lively nuns.

The differences in the luxurious life that defines Deloris’ character contrasts starkly with her new life with the nuns. Deloris’ saving grace is her incredible talent for singing that helps her bond with the other nuns. She finds a surprising way to save the convent from being bought.

“I’m an ensemble nun,” said senior Katherine Christian. “But sometimes I end up playing Sister Mary Martin of Tours because the girl playing her is sick.”

At the convent, Deloris breathes life into the out of tune choir. While the Mother Superior does not approve of the new changes, the nuns bond over extravagant dances and songs.

“There is a scene in ‘Sister Act,’ in which Sister Mary Robert realizes that she needs to take hold of her own future and stand for what she believes in,” Glaser said.

Along with Deloris, there are several other main characters in “Sister Act.” These include Mother Superior, Sweaty Eddie, Curtis and Mary Robert, played by Glaser.

“I play the role of Sister Mary Robert, a shy postulant who is unsure of her vocation,” Glaser said. “She learns from Deloris to be strong, brave and confident.”

Throughout the musical, Mary Robert grows as an individual and in her faith. This helps her grow closer to her fellow nuns and Deloris. Mary Robert is a symbol to members of the audience who may be questioning their own future plans.

This show confronts stereotypes associated with the church and nuns in a hilarious way that inspires the audience to do the same. Instead of exasperating these differences, “Sister Act” creates a safe space for students and religious members to start a conversation about the truth behind the convent doors.

“The song’s message is powerful (because) truly living is embracing the hope that, although we may not experience everything the world has to offer, we still have the chance to do so if we stand tall and seize the day,” Glaser said.