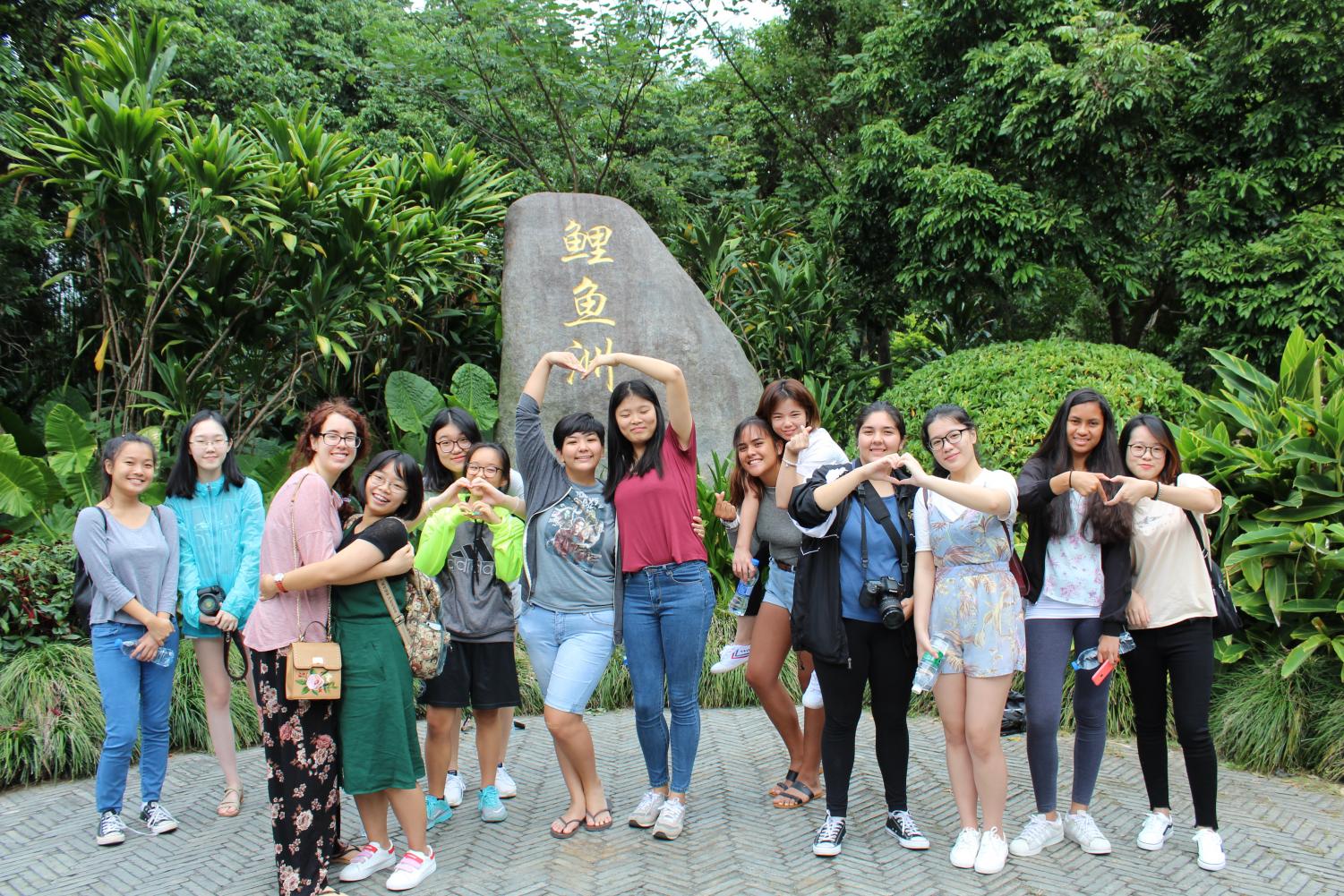 My day started out differently from our two previous days in China. After finally getting used to waking up in a dorm room, it was refreshing to open my eyes to a different setting. Rather than the dorm’s firm, pink-colored mattress, I found myself lying in a bed as soft as a marshmallow with the sun beaming through the window. In the bed next to me, my Chinese ‘big sister,’ Ella, was getting ready for the day’s adventure.

We started the morning by meeting up with the other students and teachers for breakfast. The food choices were a vast selection of both Chinese and Western cuisine, many of which were the tastiest dishes I have ever eaten such as the savory meat buns and crispy char siu.

Right after breakfast, we split ourselves up to ride the shuttles to the far end of the resort, where a covered bridge was there to greet us. The wooden bridge stretched across a grand river, which surrounded Carp Island. The island received its name after being described as being the shape of a carp fish.

We continued to the end of the bridge and down a walkway where a large stone stood before us with ‘Carp Island’ engraved in Chinese letters on it. There, we took pictures with our big sisters and the teachers. After, we followed a stone slab path that led us to traditional Chinese houses, which were made entirely of wood. The house was also surrounded by ancient Chinese household appliances such as a rice maker and grinder, in which beans were put into a hole at the top and ground into a paste.

My amazement didn’t end there as we walked more towards the water and found a pier and on it, a clear view of the city. We were able to see many buildings, bridges, and boats as they rode past on the water. In the distance, a train was heard as it transported industrial materials past the various buildings.

After such a fun and educational morning, we all agreed to head back to the hotel and prepare the videos and speeches we were going to present at a dinner. We were nervous about the presentation, as it was to be presented in front of the teachers, our big sisters, and other important figures.

While working, the voices of many could be heard through the thick cherrywood-like doors, as we were able to bond more with our sisters. Just as we were amazed to see the traditional Chinese houses, they curiously observed our work and use of different technology.

Returning back to the dorms, we finished important interviews but were far from done with our video that was due that night. I was chosen to be the one to take the computer with us in the car and edit on the way to the hotel. Between the time of leaving the dorms up to when the dinner started, my eyes were fixed on the computer screen fine-tuning the video clips and audio. It was only after I finished and submitted the video that I was able to enjoy the paper cutting class being provided for us. My big sister and I exchanged our unique creations with each other and took pictures to document the memorable occasion.

Once again, the food was incomparable to the Chinese food back in Hawaii. We had fun with our big sisters as they attempted to translate the names of each food into English. I learned how to say a few useful phrases in Chinese such as ‘excuse me’ and how to introduce myself. Our laughs sounded throughout the room as some of us, including myself, pronounced the words wrong multiple times until finally saying it right. Learning Chinese is hard, but when we get to experience the language and use it in a conversation with native speakers, the experience is much better.

We ended the night with our hula titled “Nani Manoa,” which translates to “beautiful Manoa.” We’ve been preparing the dance for the past two months and were nervous from the moment we put on our flower-printed gold hula skirts to when the crowd stood before us applauding at the end of the dance.

Today was an important day for me as I got to bond with my big sister, as well as the other sisters and make memories that we can look back on in the future. More days like this will deepen our relationships with each other, which will make it hard for us to say goodbye, but for now, we will enjoy each other’s company and look forward to the days to come.