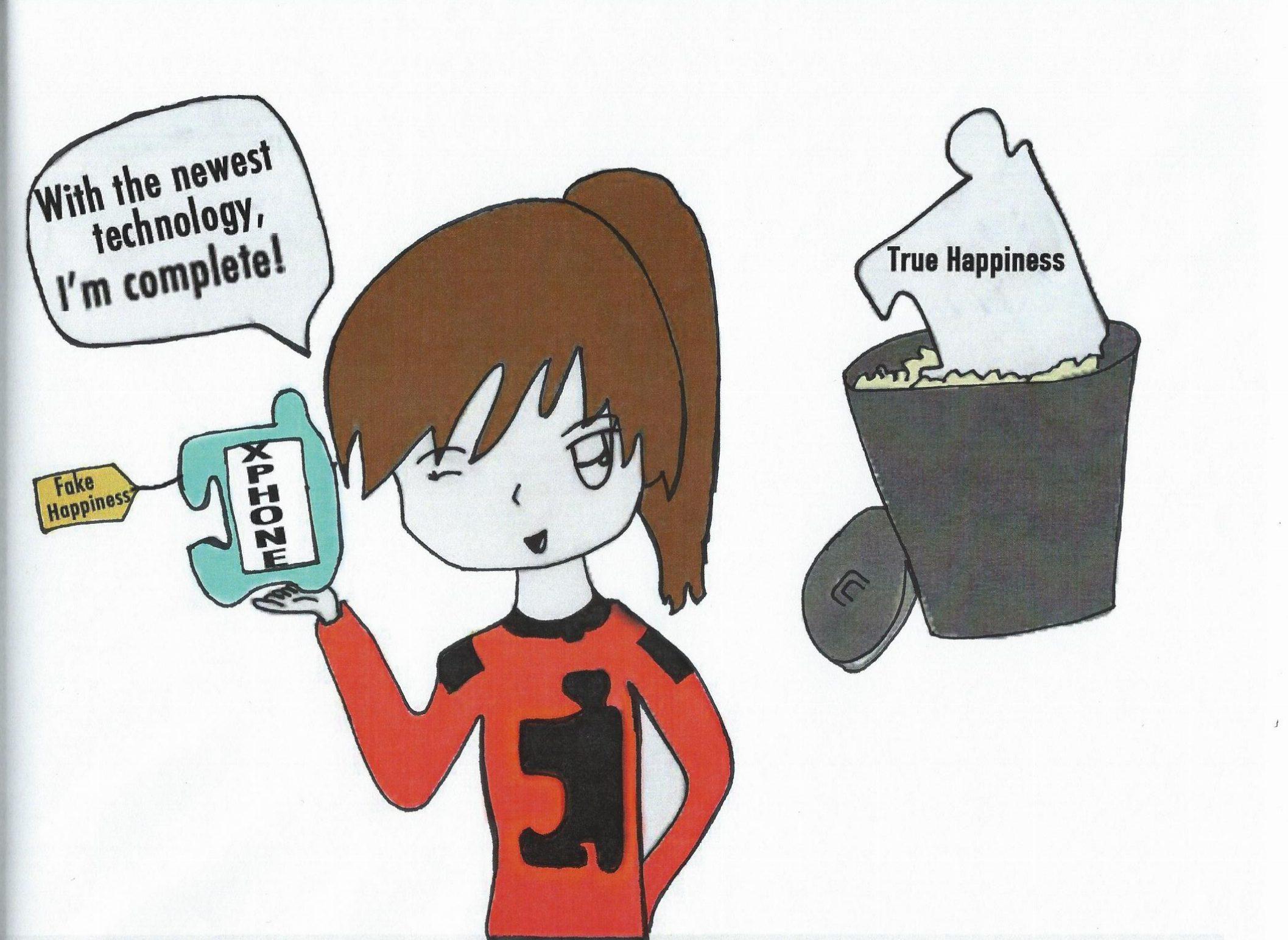 Through the centuries, the general principle of happiness has been poked, prodded, turned over on its head and studied by everyone from philosophers to scientists. Some say that true happiness comes from a climactic event or milestone in one’s life, while others say, it comes from within.

Today, however, as tech gadgets viciously cycle in-and-out every six months and social media teases society’s cravings to have the latest and greatest, it’s no wonder millennials and Generation Zers are led to believe that the simplest and quickest way to happiness is to buy it.

The notion that one can achieve genuine happiness through the acquisition of material items, however, is a flawed one. Despite this, it can be difficult to escape the culture of mass consumerism that so widely permeates a society that can afford such luxury.

Consumerism at its core

Television shows punctuated with commercials and infomercials subtly infuse idle minds with notions of material desire. Billboards lining highways and printed advertisements on every brochure and in every magazine are glaring reminders that one is obliged to take part in the whirlwind that is commercial consumerism.

The Financial Times found that, as of 2015, “The number of advertisers on YouTube has soared more than 40 percent in the past year as big brands seek to reach millennial consumers.” Thus, material desire has sparked commercial economic competition across the board and may be much more far-reaching than a mere fad in youthful generations.

In addition, the burgeoning presence of social media makes materialism all the more tempting and easily accessed. It can come in the form of a catchy hashtag some retail brand uses to promote a new seasonal collection. Otherwise, it’s a contest that hopefuls might enter to snag a treasure trove of prizes.

Beyond the ads, social media jabs

At the same time social media satiates cravings for materialistic things, it also stabs at self-worth. Through social media, one, especially someone in the crucial stages of the teen and young adult years, may develop feelings of being inadequate. The lack of views, comments or likes on a social media post can easily do this to a person.

Thus, this never-ending interaction that social media provides can create the impression that one is constantly being viewed and judged. This, in turn, may lead to material desire in hopes of filling the void of inadequacy. As American philosopher and psychologist William James said, “The deepest principle in human nature is the craving to be appreciated.”

This principle is a main driver of the unsubstantiated idea that one can, so to speak, buy their way to happiness. As a generation who grew up in the age of the internet and instant gratification, we often look to the easiest and quickest solutions to our problems, which may not always be the most effective.

An example of this might be purchasing the latest cosmetic products made widely popular by celebrities; celebrities who rave about a contour product for true facial definition or a concealer they claim to cure all sleep-deprived eyes.

It might even be a friend one has admired for some time; she posts photos showing astounding results from a 30-day dietary supplement she’s been trying. But do these products really live up to their hype? Or are they simply another fading fad to which society has fallen victim?

But even in this bustling, chaotic world of celebrity-promoted products and materialistic trends, it is vital to remember what is truly of substance.

The constant glorification of material obsession may lead to the notion that one must have more of everything and anything. This belief can develop into the notion that having the best, or most, of anything will make one happier, and, in some cases, socially superior.

On the contrary, being rich in wealth does not always correlate to being rich in heart. Once caught in the destructive cycle of mindless material consumerism, the belief that happiness is proportionally related to amount of commodities begins to live at the forefront of the mind.

In a story by ABC News, studies were conducted on the brain’s response to happiness and revealed that physical or tangible aspects, such as a makeover or a winning lottery ticket, create fleeting happiness that vanishes after a period of time. It was concluded that acts of intention, such as meditation and mindful acts of kindness, can change the brain’s perception of happiness. This makes joy more easily accessible and fulfilling, as well as long-lasting.

Happiness is not determined by wealth, nor can pure joy be generated by it.

Dedicating a few moments each day to participating in reflective activities, such as meditation, journal writing or prayer, is an equally simpler and cheaper alternative than turning to the shopping malls. One is forced to examine intentions, thoughts and emotions, which strengthens self awareness, lessons stress and anxiety, and in turn, can lessen dependency on material items for internal fulfillment.

Moreover, the rise of not only social media but also technology, in general, has made consumerism more accessible, quicker and simpler. It allows companies to deal directly with their customers without the need for shoppers to leave their homes.

In an article by MONEY magazine, “Millennials have been twice as likely as other generations to pay extra for same-day delivery of online purchases.” The want for material items in the most recent generations, if it doesn’t already, will begin to have an economical effect as people begin to invest in the principle of “having more.”

This principle is also having social repercussions.

In a story by The New York Times in Nov. 2016, people accounted their personal tales of frenzied shoppers and large crowds that came together in shopping malls across the nation for the social and economic phenomenon that is Black Friday.

Recently, however, almost 40 percent of millennials are choosing to turn to computers to do Black Friday shopping.
Nevertheless, the madness associated with buying and owning more items is being commercialized and exploited by companies, perpetuating the cycle of materialistic desire.