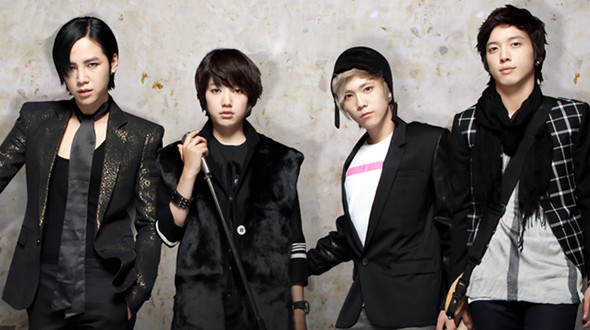 “You’re Beautiful”  features Park Shin Hye as Go Mi Nyeo who is on the path to becoming a nun. Go has a twin brother, Go Mi Nam, who is part of an idol group A.N.JELL.

When they were young, Mi Nyeo and Mi Nam were left at an orphanage by their mother after their father passed away.

The manager of A.N.JELL, Ma Hoon Yi (Kim In Kwon) visits Mi Nyeo to convince her to pose as her brother for a month. They need her to substitute for her brother so that he can go to the United States to have surgery.

When she is first told of the situation, Mi Nyeo refuses. After a bit of convincing, she finally agrees to go with the plan because she thinks the popularity will help her find her mother.

As she pretends to be her brother, Mi Nyeo meets his bandmates who do not know who she is. The members of A.N.JELL are Hwang Tae Kyung (Jang Geun Suk), Kang Shin Woo (Jung Yong Hwa) and Jeremy (Lee Hong Ki).

In the beginning Hwang does not take a liking to Mi Nyeo while the other members are kind to her. He discovers her secret and threatens to tell the others, but she is able to convince him to keep her secret and allow her stay as a member of the group.

As she spends more time with the group, Shin also discovers her secret but never confronts her. He also starts to develop feelings for her in addition to another band member, Jeremy, who still thinks that she is a boy.

Mi Nyeo starts to fall for Hwang even with his cold personality. Will he reciprocate her feelings or will she leave the group with a broken heart?

“You’re Beautiful” is recommended for those who like dramas about romance mixed with a little bit of confusion.