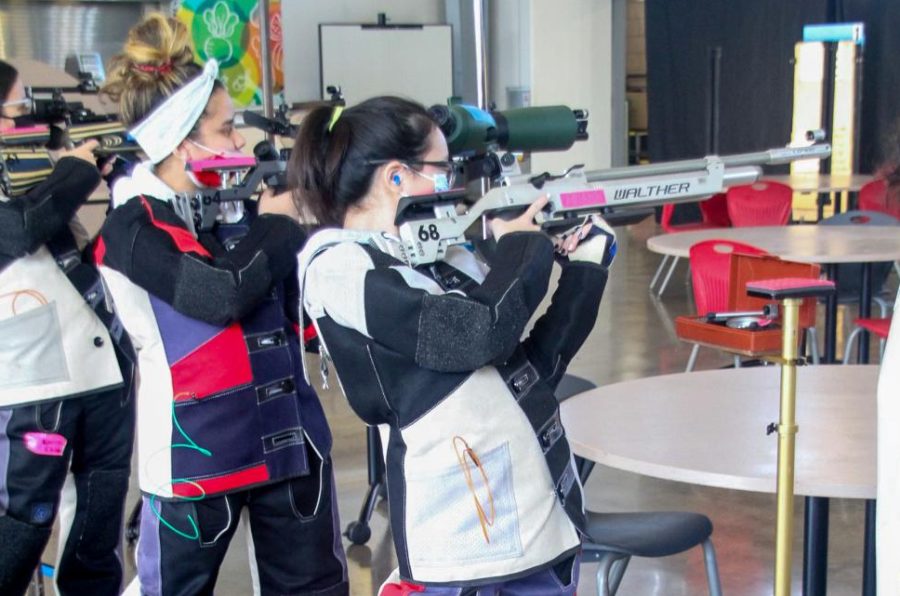 Academy junior and daughter Ariana Sun at a riflery match against Pac-Five this year. She is one of the team's top shooters. Photo courtesy of the Lancer Air Riflery Team.

For junior Ariana Sun, being a “daughter” at Sacred Hearts Academy is nostalgic. “Looking back…it’s amazing to see how far my classmates have come, especially those who have been with me from the start,” she said.

After spending almost 13 years at the Academy, students earn the title, Daughters of the Sacred Hearts. The tradition goes back to more than 50 years, and for many students, it is a special recognition unique to their education.

“The Academy has helped me to constantly surround myself with an influential support system (with) wonderful role models (who) helped me to grow into the person that I am today,” Sun said.

Through her years attending the Academy, Sun has been on the Principal’s List and is a member of the National Honors Society (NHS). Outside of the classroom, Sun is part of the Academy’s air riflery team. This year, she placed 6th at the state Sporter Riflery Championship.

“As daughters, we’re able to see each other fully develop and grow into strong women,” Sun said. “Because of my extended years at (the Academy), I was able to grow alongside my peers to become a better individual.”

The Academy provides education to girls from preschool through high school. This allows the opportunity for students to attend the Academy for their entire school career, which can be between 11 to 13 years. The preschool opened last year. Prior to that, students entered from Kindergarten.

Freshman Cocomi Mehring often finds herself on the Kaimuki campus outside of school hours. She is rehearsing for dance and theater or just hanging out with her friends after school.

For junior Sydney Europa, the Academy has provided a safe place for self-discovery.

“I’ve had the opportunity to safely grow into myself and not have to worry about outside forces,” she said. “I’ve always grown in my interests and academic abilities.”

Europa, who has been attending the school since Kindergarten, pursued her passion in basketball. The varsity team just recently placed second in the Division II state championships. She has been playing on the Lancer team since the fourth grade. Europa also enjoys having a leadership role on the yearbook staff.

Her twin sister, Samantha Europa, ventured down a different path as a daughter. She excels in golf and has been on the Academy’s golf team since the seventh grade. She was also able to find a passion for filmmaking, while taking a video productions class at the Academy.

“To me, it’s being loyal to one school for years,” she said. “I’m not afraid to speak my mind and give opinions, which I’m not sure I would have (felt) at another school.”

After sharing their personal experiences, the daughters talked about what it was like to watch their peers grow up. Mehring said the most memorable aspect included “the stuff that stuck with them,” referring to the traits or interests that her classmates kept, even after all the years have passed.

Not only did the daughters watch their classmates grow up, but their elementary teachers were also able to watch their students grow into young women.

Melody Coloma, who has been teaching at the Academy for more than 20 years, said, “It sounds cliché, but the Academy really has become a second family for me. While my year with them usually ends in May, I’ve been able to share in their lives forever.”

Coloma, a third grade teacher, said her ties with former students continue even after they leave the Academy. She shares in their life’s milestones by attending events such as graduations, weddings and their children’s birthday parties.

Other schools share the tradition of giving the title of son or daughter to students of more than 13 years, according to former Head of School Betty White. Although they may have different names, she said, the concept is the same.

White had been at the Academy for almost 50 years before retiring a few years ago.

“Being named a daughter is a source of pride for the student’s entire family,” said White, who estimates about 10 percent of the graduating class earns this title each year.

Currently, the Academy has about 625 students enrolled. There are 17 seniors who will graduate as a daughter this year.

The term daughter may have only formed within the past two decades, according to White, but the tradition goes back more than 50 years.

“Older alumnae often talk about their time at Sacred Hearts Convent School prior to transitioning to Sacred Hearts Academy,” said Tiffany Kiyabu Nishimura, Academy alumna and Director of Alumnae Affairs. “There is some disconnect…but once the Convent School closed its campus, all students there transitioned to (the Academy).”

After more than 13 years at the Academy, the daughters receive recognition through a page dedicated to them in the yearbook. The page includes a group picture of all the daughters during their senior year and individual pictures of the girls from when they were in Kindergarten.

The daughters also get recognition when they walk across the stage to receive their diploma at commencement.

“During the (Baccalaureate) Mass, the daughters of the Academy are recognized by name and presented with a gift,” Kiyabu Nishimura said. This gift varies as the years pass, but recently, it has been a gold card that could be worn on their cap or gown at the mass and at graduation.

As all things do, these girls have to end their time at the Academy. Something that the girls will take with them after graduation is the work ethic that the Academy has instilled in them.

For Sydney Europa, she will remember “to be comfortable with being uncomfortable, so (she) can always work at (her) best.”

Along with the knowledge, Mehring said that she will take “the relationships with all (her) peers and teachers.” Additionally, she will “take away the wise words past teachers have told (her) and the memories from (her) time at Sacred Hearts Academy.”