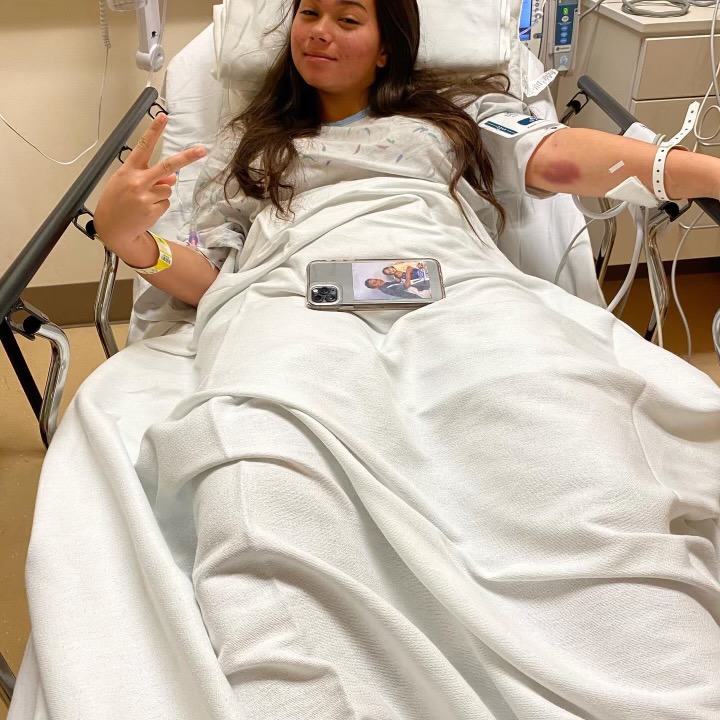 Tuitele goes through surgery for her gallbladder.

Globally, athletes have dealt with an array of injuries, resulting in the need for physical therapy and/or mental strengthening. Talia Tuitele, a graduate of Campbell High School, and Kalepo Fiaseu, a graduate from Saint Louis School both faced similar challenges as student athletes.

Tuitele has endured various injuries throughout her years of playing volleyball. First starting when she was in middle school, Tuitele has gained experience in handling injuries, while still playing with different teams and players.

“I suffered from a bruised hip, which affected my ability to play volleyball,” she said. “I also had gallbladder surgery that kept me from playing for two to three months,“ Tuitele, although having a small number of injuries, had major incidents that affected not only her playing time but also her daily routines.

From bruises to surgeries, Tuitele took care of her body in order to heal and return to the court. Tuitele took prescribed medicine everyday to lessen the pain from her surgery. She also did stretching exercises to keep her body from stiffening completely.

Fiaseu has also shared his past experiences with injuries. Throughout his high school football career, Fiaseu has endured a number of concussions and went through surgery after tearing his shoulder. Though these injuries are common for football athletes, they cause great damage to the players.

“I tore my (acromioclavicular) joints in three different places on my right shoulder and suffered a handful of concussions,” he said.

According to a sports article, “Mind, Body and Sport,” “The psychological response to injury can trigger or unmask serious mental health issues, such as depression, anxiety, disordered eating and substance use or abuse.” Months of physical training and building up one’s mentality gets easily reset after a single incident.

Injuries can be a massive obstacle for athletes and completely stop the hard work mentality they have been putting in for months. Though Fiaseu had suffered physically, it hadn’t affected him mentally. Fiaseu explained how he chose to work through his pain and strengthen himself so he could get back on the field. He has gone through numerous training sessions and therapy for his injuries, as well as took days off to ensure he was mentally strong.

“It didn’t really change my way of living. I kept doing what I needed to do, and just did it,” Fiaseu said.

Both Tuitele and Fiaseu are just a few examples of how athletes all over the world respond to injuries. It is important to understand that athletes have their own way of handling their situation and the path they decide to take. Injuries, though a small price to pay for the game, can have a massive impact on the one playing.

“I just continued to make myself stronger so that I wouldn’t get hurt anymore, and I was cautious here and there. I still did what I had to do. I continued to play as much as I could,” Fiaseu said. He went on to say how injuries impact one’s mind while playing. Though being excited to play again, Fiaseu said that there were always certain times that he would hold back in fear of getting hurt again.

Sports injuries are a common occurrence for athletes of all ages. A “Healthline” article on sports injuries shows statistics from Stanford’s Children Health. “More than 3.5 million children and teens are injured as part of an organized sport or physical activity each year,” the article states. Additionally, “one-third of all injuries in children are related to sports.”

Days, weeks, months pass by, and before student athletes realize it, they aren’t playing at the same level as they were in the beginning of their athletic seasons. Not only do they have to build up their physical abilities but their mental state as well. It takes patients and acceptance to acknowledge that they have to start from the basics again and work on their stamina throughout.

“I would make sure to take my medicine before practicing; most of the time, I would try to not think about it, which helped a lot,” Tuitele said. “And sometimes, I would have to use a heating pad before practices.”

Similar to Fiaseu and Tuitele, I have also suffered numerous injuries on and off the court that affected my playing, as well as my daily routines. In the five years I played volleyball, I twisted both ankles 10 times and tore the left patella in my knee. Initially, my love of sports had kept me going and coming back to play more. However, after my most recent injuries, I decided that playing wasn’t worth putting myself at even more of a risk. I stopped playing altogether.

In my case, I played numerous sports while growing up, which eventually led me to even more injuries. During my time in volleyball, I had countless ankle injuries, leading me to the hospital twice and using crutches. I have also gone to the hospital for a minor tear in my left knee when I landed incorrectly during practice. As a result, I missed out on four months of my volleyball season. In my first and last season of softball, I had a semi-dislocated shoulder after running on the bases during a game.

Though all three of us suffered different injuries, we each ended up in the hospital, using crutches to walk or wore a sling to stabilize our shoulder. However, mentally, we had different results. As Tuitele had a difficult time watching games during tournaments, and traveling and practices on the sidelines, Fiaseu hadn’t let his injuries get to him.

After taking time away from sports, the feeling of playing again brings back memories and the want to play. Stepping on the field once again, many athletes start to remember the reason they started.

“The feeling of finally getting back on the court was just bittersweet,” Tuitele said. “I knew that I expected more of myself and that I was gonna leave everything on the court.”

Injuries are common throughout all sports at any league or age. Injuries can leave a toll on your mental and physical health, which is why it’s important to take care of yourself while you’re out of the game or sidelined.