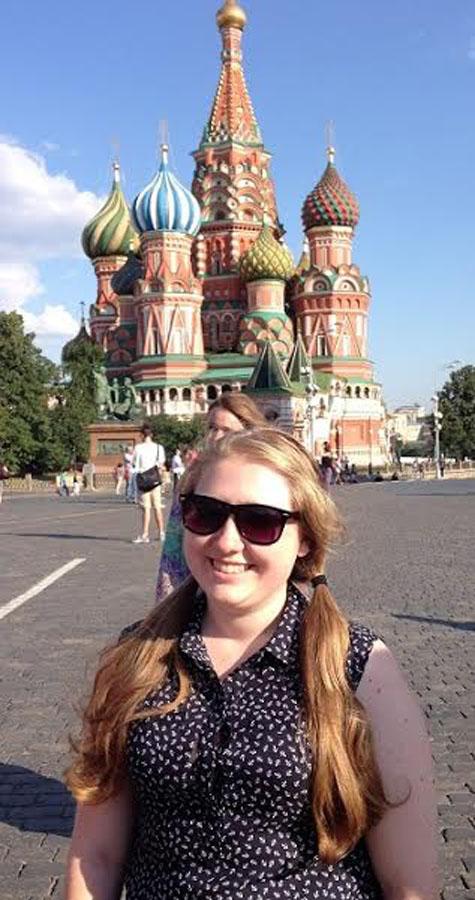 Six weeks in Moscow learning Russian isn’t the typical teen summer, but for senior Zoe Sprott, it was the chance of a lifetime.

Sprott was one of 15 American students selected from a pool of 3,500 students, ages 15 to 18 years old, by the National Security Language Initiative for Youth (NSLIY), and sponsored by the U.S. Department of State, Bureau of Educational and Cultural Affairs. The purpose of the program is to promote cultural affairs with foreign countries through immersion in language. Programs are also held in China, India, Korea, Tajikistan and Turkey. All fees were paid by the Bureau of Educational and Cultural Affairs.

Sprott was thrilled when accepted.

“It was the period at the end of the day. I checked my email and right as the bell rang, I read that I was accepted. I was basically freaking out internally the whole time. I stifled a scream,” said Sprott.

Transportation from Hawaii took 33 hours to reach the city in Russia where Sprott would be spending her summer, including a 10-hour flight to New York, a  second 10-hour flight to Moscow and a 13-hour train ride to the final location in Kirov.

“I purposely tried not to think too much about what I thought Russia would be like in order to avoid more of a shock when I arrived. I had no idea what to expect, and I was still so in shock at the fact I was going that I didn’t have much time to form an opinion. The only opinion I maintained was that they were also human, and I think that was what helped me adjust and remain adaptable,” said Sprott.

Students stayed in a dorm the first three weeks of the program and resided with host families during the last three.

“Since we were beginners in the program, they wanted us to have a chance to acclimate to the Russian language before moving into the host families because our host parents usually didn’t speak any English,” said Sprott.

The average class day consisted of four to five hours of Russian language classes followed by a cultural activity. Activities in language class focused on reading, writing, speaking and listening. The program entailed intensive language learning with constant practice. By the end of the program, students had 120 hours of classroom time. Sprott had minimal knowledge of Russian prior to the program but can now converse on a primary level.

“I gained a better understanding in general. I know much more about Russia and its culture than I did before. I can understand the Russian language. Also as cliche as this sounds, I found myself. I’m more mature and independent now because of the experience,” said Sprott.